Well, this is definitely something worth writing about. I jumped out of an airplane. The airplane was 14,750 feet in the air. The free fall was 60 seconds. It was amazing. I had never thought about sky diving before and was never something I really wanted to do. A couple of people I work with on the ship really wanted to do it though and invited me. I am so glad I went with them. It was a truly amazing experience.

When we arrived at the air strip the people working there immediately wanted us to decide which package we were going to purchase. So we had to choose between 14,000 or 8,000 drop. We also had to choose if we wanted photos or video. Just the drop from 14,000 was $149. Photos and video would have brought it up to $309. I opted for just the drop but my friends got an added photo option of $68 and I happened to be in a couple of their photos. So you can see those here.

Anyways they really pressured us to decide fast and then soon as we had decided they were strapping us up and we boarded the plane and took off in a matter of minutes. It was so fast. Then it took about 10-15 minutes to get up to height and bang I was jumping out of a plane! I was quite nervous on the ride up as everything happened so fast I didn’t know what to expect. Soon as I jumped though it was very peaceful and not very scary. The earth didn’t come hurtling toward me because I was so far up. I could see a lot, it was beautiful. Especially to do it in Hawaii. The parachute opened before I expected it to, but I guess time goes pretty quick when you’re hurtling towards the earth. After the parachute opened I saw a whale breach. Amazing to see that from way up in the sky. The guy who was strapped to me coached me on what to do for landing. We landed smack on our butts but didn’t hurt.

So for these photos, I didn’t get the photo package but I appear in some of Lucille’s photos, so there is proof I jumped!

Definitely gonna do that again someday!! 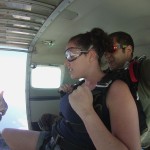 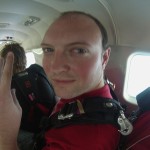 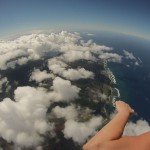 One Response to Skydiving in Honolulu